No, however we have a great alternative!

*Stated loans are available for investment properties only. 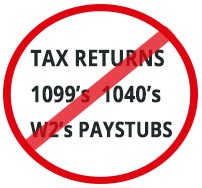 What is a Stated Income Loan? In the past, stated income mortgage loans were residential loans that did not require income verification or documentation. The income on the application was what the borrower said or “stated’ that it was. No W2’s, tax returns or other income documentation was needed. These stated loans were also referred to as “no income verification,” “SISA (stated income, stated assets)”, “SIVA (stated income, verified assets),” and even “Liars Loans.”

Are Stated Income Loans still available? Stated Loans were thought to be a contributing factor to the mortgage meltdown of 2008. The Dodd-Frank Act of 2010 put an end to stated income loans. Today, you cannot take out a stated income mortgage. By law, lenders must now fully document a borrower’s ability to repay loans. As a borrower, you must provide documents that prove that you have the income or the assets to repay a loan. These laws apply to all mortgages for owner-occupied housing.

One of the reasons stated income loans were created was to accommodate self-employed individuals who had trouble qualifying for a traditional loan as they did not show as much income on their tax returns.

If you are self-employed and in need of a mortgage loan, we have great news! SCL Mortgage has a great alternative to stated income loans! They are called loans for the Self-Employed or Bank Statement Loans.

Learn more about loans for the Self-Employed or Bank Statement Loans here.

*Stated loans are available for investment properties only. Contact us for more information here.